Parmigiano Reggiano or Parmesan cheese has had more imitators than almost any other product. Its unique taste is now appreciated in every corner of the world, but true parmesan has its origins only in the “Reggiano” region of Italy. Moreover, parmigiano is now a protected product, carrying the Protected Denomination of of Origin (PDO) designation.
The traditions around this historical cheese, now a symbol for Italian made products, are protected and maintained by the Consorzio del Parmigiano Reggiano (the Consortium for Parmesan from Reggiano). This body brings together all its producers and it formally established an official mark of origin for the cheese during the last century. The Consortium verifies that producers in the Reggiano region, or the provinces of Parma, Reggio Emilia, Modena, Bologna and Mantua, follow established production rules. These rules strictly lay down all the stages of cheese making. In addition to safeguarding production, the Consortium is also involved in improving quality, assuring authenticity and promoting knowledge.
The history of this well-known aged cheese goes back many centuries.

The history of the dairies producing Parmigiano Reggiano

Where were the first dairies that made the cheese? They were in Cistercian and Benedictine monasteries.
The history of Parmigiano Reggiano dates back approximately 900 years. Today, as then, the ingredients were always the same: water, salt, milk and much patience during the aging process.
But, the most important ingredients were the pastures of Emilia Romagna. The Cistercian and Benedictine monasteries, which spread over the plains between Parma and Reggio Emilia, favoured the development of granges or farms for raising cows suitable for milk production. The coming together of these granges with salt from Salsomaggiore, and the need to make a product that would keep for as long as possible, led to the creation of a very particular cheese, Parmigiano Reggiano. 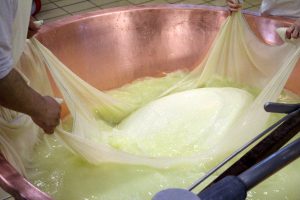 The first written record of Parmigiano dates back to 1200. A notary deed, drawn up in Genoa in 1254, mentions caseus parmensis. During the 14th century, the Benedictine and Cistercian abbeys maintained a monopoly on the production of the already renowned cheese by exporting it throughout Italy, reaching as far as the Mediterranean ports. In 1344, Giovanni Boccaccio writes of “parmigiano grattugiato” (grated parmesan) over “maccheroni e raviuoli” (macaroni and ravioli) in the Decameron, hinting at how this aged cheese might have been used at the time.
Over the years, Benedictine agricultural and commercial production expanded, bringing Parmigiano also to Modena. But, from the16th century onwards, it was marketed in the whole of Europe. Cheese “moulds” for making it arrived in Germany, France and Flanders, where it is cited by the best chefs of the day. However, a need for safeguarding its production arose alongside its fame. In fact, on 7 August 1612, the Duke of Parma drew up a formal denomination of origin, establishing the places which could use “Parma” in the their product’s name.

Not only Boccaccio, noted the cheese. The goodness and fame of Parmigiano Reggiano spread early on throughout Europe and the rest of the known world. Robert Louis Stevenson also mentioned it in his book Treasure Island. Doctor Livesey talking to Jim, the protagonist says: “You’ve seen my snuff-box, haven’t you? And you never saw me take snuff, the reason being that in my snuff-box I carry a piece of Parmesan cheese–a cheese made in Italy, very nutritious.” To be nutritious. This was precisely, the main objective the monks from Reggio Emilia had in creating parmesan nine centuries ago. 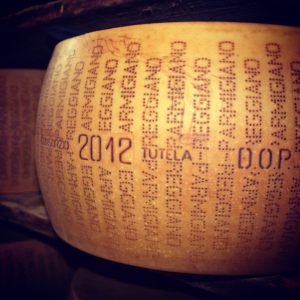 Several centuries ago, it was already thought necessary to protect against counterfeit parmesan. Over the last century, this protection has become a necessity defended by law.
The first consortium for verifying product origin was registered at the Chamber of Commerce of Reggio Emilia in 1901. Eight years later, representatives of the Chambers of Commerce of Parma, Reggio, Modena and Mantua met to establish the wording for the labelling of the cheese. Meanwhile, problems linked to counterfeiting grew worse. Even a “Reggianito argentino” (Argentinian parmesan) came on the market.
In 1928, the voluntary Consortium for the defence of Grana Reggiano and later for Parmigiano Reggiano was established. This Consortium brought together all the producers and established a mission that it still carries out today: brand protection.
In fact, among its main tasks is strictly applying the official Production Rules, which were updated on 29 August 2011.
The Protected Designation of Origin for the cheese follows EEC Regulation 2081/92 and Regulation (EC) No. 1107/96. 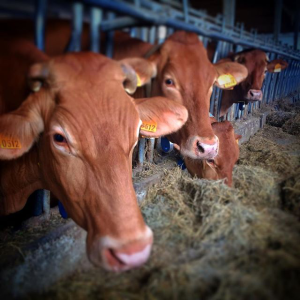 Only cheese produced in accordance with the Rules of Production may carry the Parmigiano Reggiano label. Dairies who want to join the Consortium and produce parmigiano must meet special requirements. The necessary prerequisites are: meadows in the province of Reggio-Emilia, pastures between Bologna and the left of the Reno River or in Mantua to the South of the Po River. The cows used consist of the Reggiana, Rosse (red) or Longobardi (Lombard) breeds.
The vast majority of dairies that produce Parmigiano Reggiano today, however, use milk from Friesian cows which came to the province of Reggio in the early 1900s. However, there are still those who rely on Vacche Rosse (red cows) to produce top quality cheese.

Subscribe to our newsletter and we will send you news and ongoing promotions.